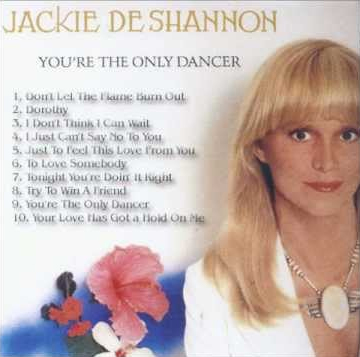 Singer-songwriter Jackie DeShannon is the soulful voice behind two enduring 1960’s anthems — Burt Bacharach & Hal David’s “What The World Needs Now Is Love” and DeShannon’s own “Put A Little Love In Your Heart.” Beyond those standards is an artist who has created a body of work covering a diverse range of genres including rock, folk, R&B, country, gospel, reggae and jazz. Her songs have been performed by Brenda Lee, The Byrds, Marianne Faithfull, Al Green, Annie Lennox, The Searchers, Pam Tillis, The Carpenters, Kim Carnes, The Temptations, Rick Nelson, Cher, Van Morrison, Ella Fitzgerald, Dolly Parton, Irma Thomas, Bruce Springsteen and dozens more.

Born in Kentucky, Jackie started her career on live radio while in her teens. Her earliest recordings were rooted in rockabilly, such as her Buddy Holly tribute composition, “Buddy.” Jackie wrote dozens of songs with Sharon Sheeley (“Dum Dum,” “The Great Imposter,””Breakaway”). Collaborations followed with Randy Newman, Jack Nitzsche and Jimmy Page. In 1964, Jackie toured as an opening act for The Beatles. Writing solo, she composed the hits “When You Walk In The Room” and “Come And Stay With Me.”

Jackie earned a million-seller in 1969 with “Put A Little Love In Your Heart,” written with her brother Randy Myers and Jimmy Holiday. Subsequent writing partners include Van Morrison, John Bettis and Donna Weiss, with whom Jackie earned a 1982 Grammy for Song of the Year with “Bette Davis Eyes.” In 2010, she was inducted into the Songwriters Hall Of Fame. Jackie’s latest album offers acoustic arrangements of her classic songs.